I think you’ve been waiting for these photos long enough, don’t you? For those of you who don’t know, we began renovating our kitchen in early December. We rented the house for years until October, so we’ve been anxious for years to do kitchen decor renovation.

It’s so great to finally have a kitchen that represents us & how we live, and not some generic ugly contractor kitchen!

I’ve marked the stuff for the kitchen that I bought or found similar items since you’ve been asking about it in the comments.

A little about our new layout. I’ve had this in mind for at least the last two years. A wall on the left for appliances and a big pantry cabinet. The middle wall with only the cooktop and a row of upper cabinets. The right side would end where the wall bends, giving just enough room for the sink.

As for the rug I was choosing between those two options, but decided to pick the first option, since it has more texture. Both of them are woven and made of natural materials though. I’m considering picking the second rug for our dining room.

The side table I bought is from Home Depot, it is out of stock now, so I’m leaving here the one I considered buying as well, but it is a larger one. 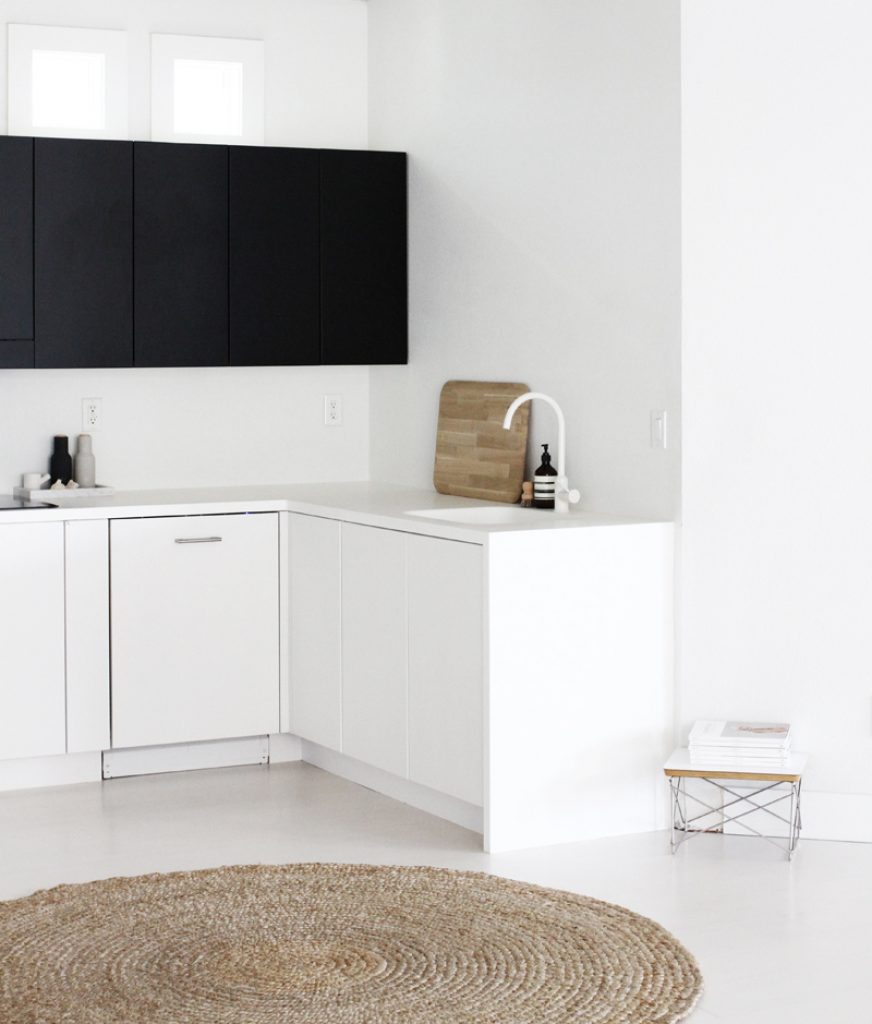 Almost everything in the kitchen had to be moved- plumbing for the sink and dishwasher needed to be relocated. Electricity for the microwave and oven needed to be moved. A new outlet for the cooktop needed to be installed. But it was worth it to have our new appliances in the places we’d use them best.

I really love the simplicity of the white faucet.

We’ve decided that since the kitchen is in the middle of our house, sharing a space with our dining table and living room and a wall with the office, it was best to make it look like an extension of what we already had.

We continued the same flooring and chose white cabinet doors, a white sink & faucet (because we wanted them to blend in) and matte white counters. To add a little bit of masculinity we chose flat black for the upper cabinet doors which also helps balance out the black cook appliances. We decided on push buttons so that none of the doors would have handles and asked that the upper doors be made a little longer so they could pull open underneath.

You can see the shelf of my cabinet. I know, I have a lot of glasses, but I need all of them and they are simple and easy to buy again if we break it (and I’m guilty of being awkward with glasses, so no fancy stuff).

I’ve been thinking a lot about the cabinet finishes and colors.

I considered light and dark stained wood cabinets with circular holes cut out of them instead of handles, all white everything, dark grey cabinets with wood herringbone countertops, concrete or tiled floor OR features like an island in the kitchen with no upper cabinets or just a few open stainless steel shelves. Brass or chrome accents, slim handles or no handles at all.

I’ve decided to stick to my favorite color scheme that is easy to support with kitchen accessories and appliances. I used the marble perfume tray as the one for salt and pepper and some condiment at hand. Blended in perfectly.

We chose some Ikea appliances because of their simple look but mostly because of their competitive warranties. Ikea offers a 5 yr warranty on kitchen appliances, which is more than most other retailers. The cabinets were custom made by a local carpenter.

I bought a set of clear glass vases, so now I can use them as a linking element in different rooms, or put them together as a centerpiece if I’m in the mood for something eclectic, which rarely happens.

For those of you thinking of starting a similar reno. project-make sure to do some homework before you start. Compare and ask lots of questions and be incredibly thorough with those you work with. I found that many times if I did not specify the tiniest detail, people would simply default to whatever was ‘standard’ even if it may not be what I had wanted. I drew pictures, sent emails with photos, made phone calls and still mistakes were made. Also, if we could have moved out for a few weeks until this was done, we would have. Simply because living in a house without an oven or sink or place to prepare food is very challenging and I would not want to relive that part!

7 Best Kerosene Heaters for Indoor Use in 2021: Powerful, Small, Portable